Coffey Strong, AshBritt Environmental and Rebuild Northbay Foundation are pleased to announce the details have been finalized for rebuilding the common perimeter walls along Hopper Ave. Coffey Strong, AshBritt Environmental and Rebuild Northbay Foundation collaborated for the past several months to ensure all of the costs were covered, including demolition of the existing walls, debris removal, and replacement with a design and fire rated material chosen by residents. The group is thankful to Martin Hirsch of the law firm of Perry, Johnson, Anderson, Miller and Moskowitz for the significant pro bono legal assistance provided for this project.

After the devastating October 9th fires, it was discovered that the Hopper wall was owned by the homeowners that adjoined it. The cost of demolition and rebuilding was a burden that would have been placed on each individual resident. Coffey Strong was determined to find a solution that would benefit the neighbors and provide a new “Gateway to Coffey Park.” The total cost to remove, dispose and replace the existing wall is approximately $ 18,250.00 per homeowner. The financial and in-kind donation from Ashbritt with the support and partnership between Rebuild Northbay Foundation and Coffey Strong has allowed this to happen.

After interviewing numerous contractors and soliciting quotes, Coffey Strong chose Restructure Group LLC of New York, the manufacturer of the RSG-3D structural panel system as the material supplier for the project. A number of RSG-3D certified contractors have participated in the design of the wall and will be responsible for the construction over a period of 3 months. The existing 6’ precast wall will be removed and replaced with a new 8’ high strength, highly durable privacy wall.  This wall system was specifically chosen for many reasons. This panel wall system is fireproof, seismic-resistant, easily repairable and sound attenuating. The 2900 linear feet of wall will be a stucco finished wall with columns placed 20’ on center.  Coffey Strong is still seeking funding for the stone veneers on the columns.

Jeff Okrepkie, Coffey Strong Board President stated, “We’re thrilled to have AshBritt Environmental provide the funding for our solution to a significant problem for 40 of our residents. However, it doesn’t just impact those homeowners. It will bring new life to Hopper Avenue and the gateway to Coffey Park.”

AshBritt contacted Rebuild Northbay Foundation in late February inquiring about projects that would have a meaningful impact on the community. Immediately, Rebuild Executive Director Jennifer Gray Thompson suggested the Coffey Park walls. “We are all acutely aware of the number of unmet needs combined with insurance shortfalls that prevent fire survivors from rebuilding better, safer, and faster. Rebuild is committed to assisting in finding relief for the fire affected communities through collaboration with the private, public and nonprofit sectors. The collaborative relationship between AshBritt, Coffey Strong and Rebuild Northbay is a model of multi-sector problem solving after an unprecedented disaster. Together, anything is possible.”

Notably, the original estimate of $300,000 to replace the walls fell far short of the actual cost. AshBritt understood the practical and emotional imperative of completing this project and rose to the challenge.

“AshBritt’s corporate core values include being an active partner in the long-term recovery of Santa Rosa and the entire wildfire impacted area,” said AshBritt CEO Brittany Perkins.  “This includes contributing up to $650,000 supporting locally identified community recovery initiatives throughout Northern California.  The Coffey Park project is a significant symbol of recovery and resiliency for the community. AshBritt is proud to partner with Rebuild Northbay and Coffey Strong to make this happen.”

AshBritt is contributing $450,000 for the Coffey Park wall and other yet to be specified community initiatives through the Rebuild Northbay organization.  In addition, AshBritt and its partners are contributing between $100,000 to $200,000 in-kind contributions relating to the demolition, hauling, and disposal of the existing wall.

At the execution and approval of all required permits and homeowner agreements needed to demo the existing wall and construct the new wall, AshBritt will transmit above noted funding to a segregated and specified Rebuild Northbay funding account for this project.

Coffey Strong, AshBritt, and Rebuild Northbay are grateful for the support of the City of Santa Rosa in navigating the process, from permits to removals.

“The Hopper Wall replacement project is a great example what we can accomplish when the whole community comes together.” Henry Hansel, who serves on the Board of Directors for Rebuild Northbay Foundation as well as being a major employer in the region. 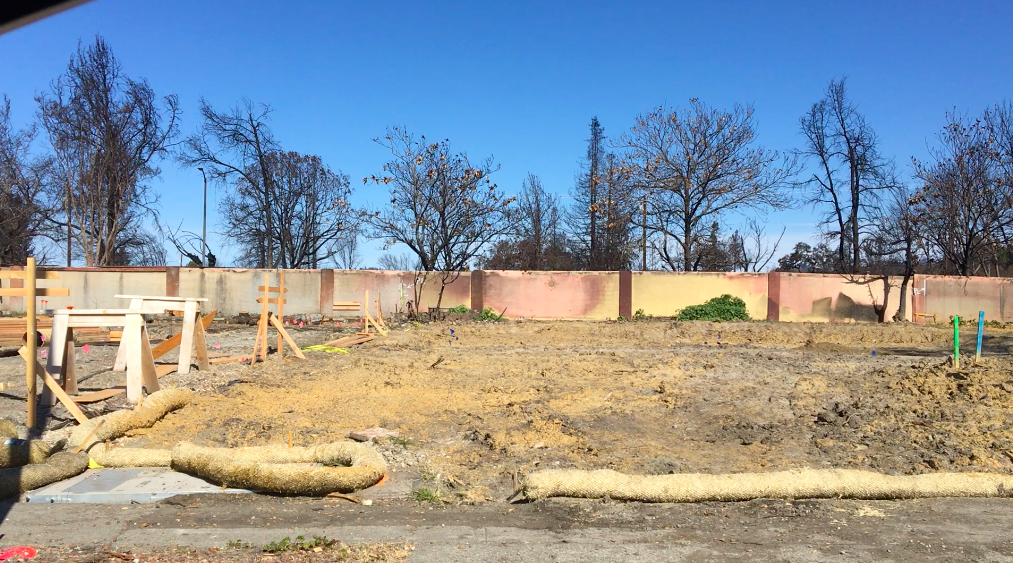