More on Builders, and Notes About a Realistic Timeline 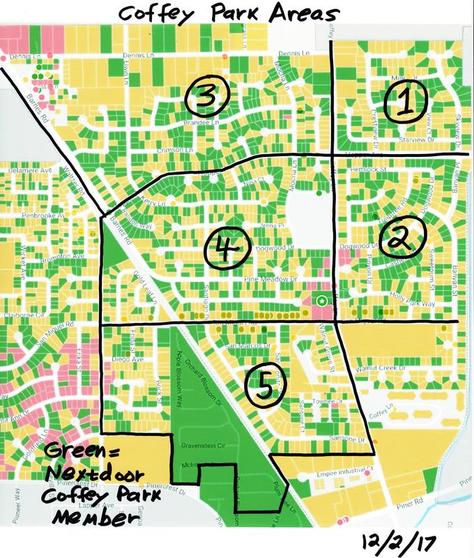 Map from Nextdoor.com showing the Areas of Coffey Park’s Coffey Strong organizing efforts. Houses in green are addresses that are part of the Nextdoor network.

There are a LOT of builders interested in rebuilding Coffey Park. We (the Coffey Strong volunteers) have tentatively grouped them as follows:

1: Builders who are interested in building 50+ houses each: APM, DeNova, Gallaher, Stonefield, Synergy. We just today posted a matrix of information on these builders on the website: http://coffeystrong.com/builder-matrix/. Not all of these builders are willing to build in all Areas; for example, APM is unwilling to build in Areas 1 & 2 because they are focused on rebuilding Condiotti homes, which are mostly in Areas 3 & 4.

2. Medium-sized builders who want to do 10-50 houses each: American Pacific Builders, Tuxhorn, Cobblestone, Shook & Waller, and a bunch more.

3. Small builders who want to do fewer than 10 houses each — there are probably at least a dozen of them.

Builders Won’t Likely Stick to One Area Only

Every one of these builders are different (look at the matrix mentioned above for an example of what I mean). Those differences will have a BIG effect on which builder a homeowner selects. I don’t think it’s going to be as simple as mapping builders into Areas. I don’t think we even have a clear idea yet HOW we’re going to help match up homeowners with builders, at least not on the scale of all 1,100 burned homes in Coffey Park. Another point is that some of these builders still aren’t ready to lay out their complete program — an example is APM, who won’t have real pricing until the end of January. It takes a while for a large builder to nail down all the elements of a program this big.

Some Public Infrastructure is Needed First

When will this all get started? It doesn’t seem likely that rebuilding will be able to start until late spring — and it’s not just the weather that’s the problem! The entire neighborhood must be certified by the City & County as ready for rebuilding. Before that can happen, the infrastructure must be tested and repaired to some acceptable level (water, sewer, gas, underground electric, storm drains, etc.). That’s going to take some time.

Those builders who say that they expect to start building in February are probably just trying to nail down customers as quickly as possible. We don’t believe that Coffey Park will be ready for building to start in February. Areas 1 & 2 are different because the houses were built in 1977-1980, compared with 1986-1990 in Areas 3 & 4. Because of the 10-year time difference, the houses in Areas 1 & 2 are generally smaller. Some of the above builders are not interested in such small houses. Area 2 is working on a plan that involves boiling the original 10 Cal West plans down to five models, updating those plans to current code, and then finding a builder willing to work with that package.

The bottom line is that we are still very early in this process.  We DO understand the need for specifics, but we’re not even close to having all the data yet. We’re working on it. Please be patient.

Adapted from a Post originally written for Nextdoor on December 7, 2017 by Geoff Walker (volunteer, Area 4)